So these last few months Master and I have both spoken of the adjustments we have had to make in being together.

The issues we had in relating to each other were put on the back burner due to our distance. It was realized that our communication skills were really lacking.

Truthfully, my habit of being extremely passive aggressive when I got upset instead of talking about what was bothering me became a downer in the house and made even being around each other feel like a chore for me. He would ask “what’s wrong” my passive aggressive response “nothing”…So there you see issues of me not being open and honest and trusting.

Other issues (His sickness, my kids, stress of moving) didn’t help our situation one bit.

One night when we were out together, I finally could not hold it in any longer and broke or more like cried my eyes out. I still could not say what was bothering me as I let stuff build up too much. When I was finally able to speak days later I mentioned some of the items above that were bothering me. But as I finally began to open up I realized what i was missing the most and what was the real issue for me was our lack of intimacy.

You see with us being apart we made time to just talk to each other. One of the things we would do before going to sleep every night was to talk. Talk about our day, what was going on, politics, kids, make jokes, whatever. We would share space with each other. Just us space. This was better than sex space, this was us connecting together, relaxing with each other, mentally and emotionally reconnecting. This for me was so freaking important more than I realized.

Formulate and stamp indelibly on your mind a mental picture of yourself as succeeding. Hold this picture tenaciously. Never permit it to fade. Your mind will seek to develop the picture…Do not build up obstacles in your imagination.
Norman Vincent Peale (1898 – 1993)

Basically, I lost my happy picture. With me “doing” and “caring’ and “making sure” for everyone else, i lost my happy picture and my happy place. I saw everything that was not right and developed unhappiness and my outlook was bleak. I was secretly wishing that my house wouldn’t sell so that I could have a place to go back to you when (not if) this didn’t work out.

I am so extremely grateful to Master. He listened to me, acknowledged that stuff was screwy and had me kiss his feet.

Yeah, myself is as His slave. That’s who I am. I needed to remember why I chose to be His slave. I was not relying on my foundation which was Him. I guess Him being sick shook me more than I thought. My Superman was not so impervious after all. Instead of acknowledging that bit as well I did what I was taught to do, fell back on to my years of being a single mom and teachings of the woman always taking control and put myself in charge, lost my foundation, and lost my happiness.

Master said to me last night “we are happier now than we have been”. I agree with this. We are happy. We connect, we talk, we apologize, we are back on track.

My hand in His for ever and always. 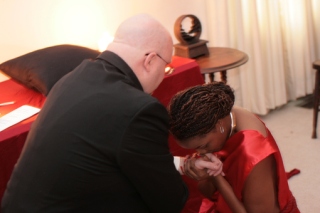