OK, I am giving my ideas about the FetLife feed on my own page.  I have made some changes to the graphics to protect the innocent. (As if any of my FetLife friends are innocent, LOL.) Before I launch into the negatives, lets talk about what they got right.

The first thing that I like is that we now have continuous feed. That means that when you scroll down, you don’t have to click to continue.  That is neat and is a big improvement. Speeds up my perving of FetLife.

I also like the change of placement for the upload links. They moved them underneath the status bar. Makes them more handy. More handy means more stuff uploaded.  Might be better if they were a little brighter, but overall they are an improvement over the old one off to the side.

The next thing I like, at least in theory (it is only available to premium paying members so I haven’t had a chance to try it out yet), is the gag feature. This allows you to put friends who overshare, or who wanted to follow you (but you didn’t care if you saw their stuff) in a kind of timeout, where you don’t see their stuff. You can also customize your feed where you may only want to see group activities, or you don’t want to see writings.  Again, this is a pay for play feature, so I have no real opinion on this. 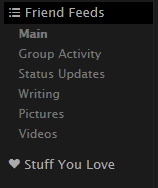 Now where did they go wrong?  Well frankly this was the ugliest update that I have seen to date on their site.  Normally John Baku shows a great deal of care and love for a site design.  And I did see him try here.  But something went horribly wrong.  The layout of this design reminded me of a Visual Studio design, and that is no compliment.  I particularly do not like the layout of the sidebar, the font size is too small, particularly for us older members.  My eye sight isn’t what it used to be.

I also have a major functional issue with the new group listing to the side.  The groups you lead, as you will notice in the picture above are all nicely laid out, like the old feed was.  But now the groups you are a member of are all in a scroll bar.  Why John, why?  I am in soooo many groups.  They all do not all show up on one screen, and it is almost impossible to use on a mobile device.  I have noted a lot of complaints from Blackberry users in particular.

One more glaring mistake is the omission of the link to support FetLife.  For some reason, they have decided to replace that with links to services that only paying members can use. Instead of seeing a friendly message asking for a support, you get a “Fuck you you non-paying bastard” feel every time you click on gag, or one of the other symbols (like the @ symbol at the top).  John, please put back the nice message. Stop turning me off with those links.  I understand that FetLife needs to make a buck. Servers don’t run on free.  And John Baku and company need to pay rent, buy food and buy remote controlled cars. But seriously, you think that annoying your users is a good way to make that money? Stop it.

OK, those are my thoughts. But I would love to hear what you think. Let me know, in the comments.

James and John have sent me some feedback based on this article.

My response was pretty simple to James. The continuous scrolling has to go.  I mean besides crippling groups on my home page, what if I want to read the stuff at the footer?  I have to go through how may hours/days worth of material? Or I have to leave the home feed.  Not a good solution.  Back to the drawing board with this one.  I suggested that they could replace the click (or at least add to it) a mouse over to the area you used to click, and that would solve the issue for everyone.  the feed wouldn’t be continuous, but it would be usable.

From John I received this message:

I suspect that that he may have been referring to the “What’s popular” feed that launched this week. Meh, not that impressed.  Still don’t see the need to screw with people’s feeds like they did to add it.  Could have easily been added as another tab.

And the tech support thread has been screaming with people having issues with the new feed.  Too much Java script for older machines and buggy code for others (probably more to do with mobile devices).

Yep.  Great planning to put your customers through the “Madness”.
MV

I am an over 50-year-old Lifestyle Master living near Charlotte, NC. View more posts

5 thoughts on “The New But Not Improved FetLife Feed”